skip to main | skip to sidebar

Sado 'The Way of Tea' for beautifying life, Samurai style 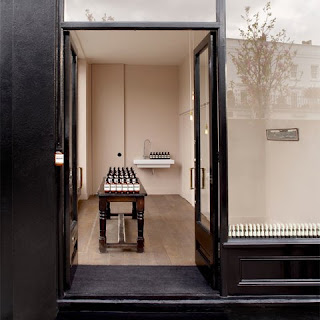 "Make your personal life orderly and restrained, to allow you to be violent and daring in your creative life"

This is a paraphrase of a Proust quote I found in the website of the extraordinary Melbourne cosmetic company, Aesop.

I would like my life to be successful in the rare and unique way that Aesop is successful, so I this is advice I wish to take. Which is why today I invited Adam Wojcinski to host the first regular Japanese tea ceremony gathering at my house. 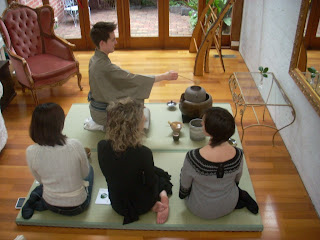 Adam embodying the Tea way of being, inspiring three onlookers.
Look at the posture of his hand, imagine his breathing. Yes, something special.

From 16th Century on, Samurai have been practicing the Zen art of Sado 'The way of tea', to transform themselves into beings deeply efficient and effective in what they do.
Constant adrenaline, constant anxiety would have been a natural, but not useful response to living each day in the shadow of certain violent death.
The rhythmic, ritual actions of tea ceremony would replace the 'fear' mindset with a 'focused' mindset. As anyone who has ever been under threat knows, stress cannot be overcome by impotent attempts at 'relaxing', That's the moment the entrepreneur would loose his company, the student would fail their course. Elite warriors, athletes, businessmen know that clarity, focus, and perfect preparation for the unexpected is the only way to earn the mental stillness that can bring relief and quiet joy.

It seems incongruous at first that the fragile cherry blossom is the symbol of the ferocious Samurai. Then you see the sad truth: both are destined to fall at the moment they achieve their full glory. 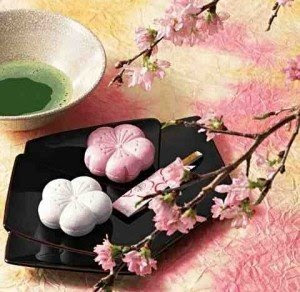 With Sado, Samurai found a way to refine their smallest movements, and to beautify the lowliest of their actions. The very action they used to draw water from the kettle on tatami at home would one day be used instinctively in circumstances that would be otherwise petrifying, drawing their bows from horseback as they fled or pursued enemies. Te ceremony cultivated an intensely aware appreciation of the mundane, the present moment, in a life when any cup of tea shared with friends could be your last. 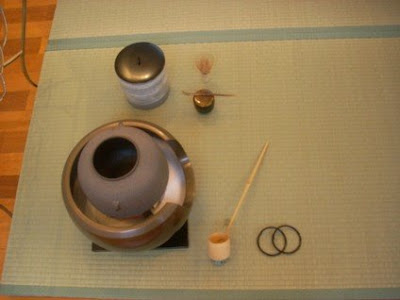 Bamboo whisk, bamboo ladle, tea in its caddy, and the kettle singing softly as water boils over a charcoal hearth. 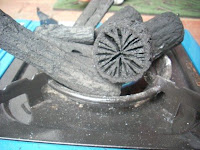 Igniting the charcoal on the veranda. Once it started glowing, Adam laid it on the impeccably arranged, incense-sprinkled ashes of the brazier before being brought in and seen by the guests. Special permission was sought from AQIS (quarantine) to import this clean-burning tea ceremony charcoal from Japan. 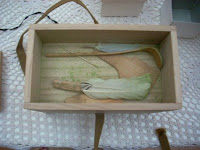 This box of tricks holds implements of feather and bamboo, for deftly arranging matcha (powdered green tea) to evoke a certain atmosphere. The tea in the caddy was sifted carefully, and when I commented that its surface evoked a mossy landscape, Adam said "that's the idea". Even in exile, the samurai may still have a pocket-sized reminder of his carefully tended garden. 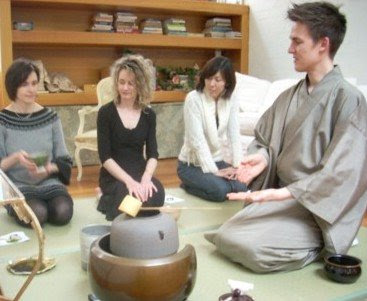 Adam shows my sister Katie the ritual way of receiving a bowl of tea. The 'front', which is the most interesting or notable part of the bowl, often a dent or flaw, is presented towards the guest. As the guest raises the bowl to drink, she makes a half-turn, to avoid any disrespect when lips touch the honoured place. 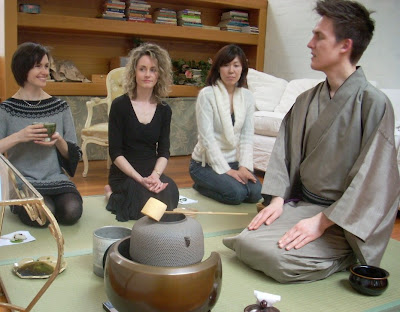 Katie, a teacher of resilience, takes on a joyful look as Adam explains the Sado way of being.
We had recently had a conversation on how it is our flaws, not our perfections, that connect us to each other. Maybe some new refinement of this hope-giving idea just went 'click' at hearing this Sado respect for the imperfect.
In each gesture, refined over centuries, you may suddenly see the answer to a problem of the day, a change of mindset that either solves the problem, or dissolves your distress about it. Here is my insight of the day: 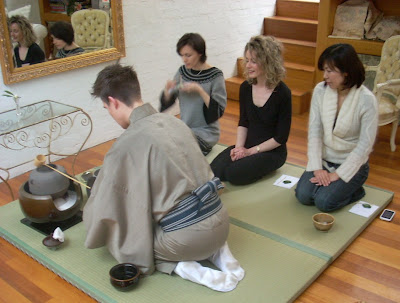 When I saw the state of the soles of Adams pristine Tabi socks, I felt distress that my floor was not as clean as it could be. Beautifying through cleanliness (subtraction), rather than ornament (addition) is a basic tenant of Sado.
Adam had obviously spent hours making everything he brought to my house immaculate, yet assured me it was all completely fine. Suddenly, I believed him. I realized, you don't worry before a battle starts, you just use that energy to get into action, preparing everything you might need. You don't worry after a battle has started either, you just make the most of what you have got, and if you live to fight another, make any changes next time.
Nowhere to worry!
"Hold on tightly, let go lightly". There is no doubt about it though, I will clean the floor with great enthusiasm this time next month. 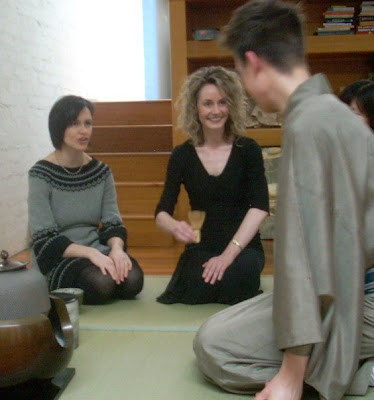 This is one of the many sayings of Rikkyu, a great figure in Sado. I first heard this principle of successful action in a tea class when I was worrying about how to communicate something delicate to a housemate. It transformed how I handle conflict before it becomes conflict.
I'm looking joyful here as I pick up this feather-light bamboo whisk, and for good reason.
These days I've been noticing how the blithe way I just strew things around ruins my life. All the time I waste searching for documents, fossicking for change in my handbag, could be reclaimed, if only I put things down with mindfulness and respect for what their next function would be.

With this whisk, Adam just taught me the other half of "heavy as if light', stabilizing my hand to the floor as I grasp it, and using 'Zanshin' when I put it back down - withdrawing my hand with a wistful feeling of departure, not an abrupt discounting of the object, as if we never had a relationship. This mindset, Adam explained, was how samurai were trained to withdraw their swords after dealing with an opponent, acknowledging the significance of what had happened, their once-in-a-lifetime connection. 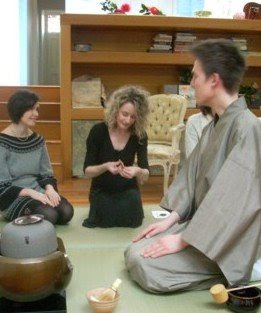 After drinking the tea, the host then allows us to appreciatively view the implements, usually asking who made them, a chance to hear any stories about them. Praise or display of financial value is not in the 'wabi' spirit of Tea. We are generally unaware, but even highly cultivated people in the past owned very few objects, and according to Feng Shui, every object you own has some power over you.
Here I ask if the tea scoop has a nickname. 'Ume no Kaori' (scent of plum blossom) was Adam's reply, a name appropriate for a utensil used in winter, which came to him as he was passing by plum trees in blossom the other day.

When younger, Adam won a scholarship, and spent many months in Hiroshima studying full-time sect of tea established by the Samurai Ueda Soko in the 16th Century. To be in the presence of mastery, of any kind, is a mesmerizing experience. The elegant effortlessness of Adam's movement comes from many hours of great effort. And where does great effort come from? You can feel it, its in the room. "Passion", said Adam. "You can't do anything to stop it".